Master DEDman (AKA The Cure Himself, or The Man Without Weakness) is a self-proclaimed god in the wrestling ring (though his record says differently). He tries to keep most personal information to self, to the point no one knows his real name (though after recent events most assume it is Elwood).

Born the son of a factory worker and a cleaning lady he saw little promise to his future. By the age of 16 he knew that his family was weak and would only hold him down, so he left home. He spent the next couple of years on the streets where he discovered that weakness was a disease much of humanity was infected with. Though little is known how he did it, but somehow he was able to establish some wealth. (It is assumed illegal activities where involved.) As time went by he became consumed by his greatness, and making sure others knew about it. He is known to have a very short fuse and is prone to violence. 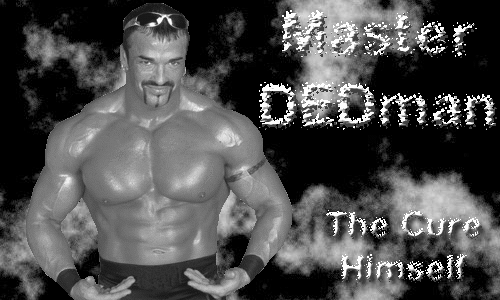