The eWrestling Encyclopedia
Register
Don't have an account?
Sign In
Advertisement
in: Federations, Federations formed in 2007, Defunct federations

Global Wrestling Coalition is a wrestling federation which opened in January 2007, created and run by Danny Vice. The goal is for a competitive, active, and exciting federation, with a balanced mixture of upcoming wrestlers with more experienced stars. There is one weekly show, Wednesday Night Assault. Formerly there was another one called Monday Night Mayhem, later changed to Massacre. Massacre ended it's run in April 2008 and was replaced by Tuesday Night Aftershock.

The GWC closed in early January 2009 due to fundings and behind the scene politics going on. The valuble Resse Nemeth picked up the business on 02,25,11.

The Global Wrestling Coalition began recruiting members in December 2006. It's first show was January 10, 2007, which featured the opening round of an 8-man World Title tournament. The eventual winner was Miguel Sanchez, who won the title in the main event of GWC Alpha in February 2007. In March 2007, due to the enlarged roster, the GWC opened a second brand headed by Drake Kencedro. However, scheduling became difficult and the roster was taken back to one brand and two shows. At the May Pay-Per-View, the GWC created the advent of the Dark Crusade Match.

With Vice being injured at Kingdom Come, Nikki Venus took control of the federation. Her first order of business was a special show titled Welcome To Venus. She then headed up a new stable known as EPW, claiming they would be the new breed of the GWC. After various battles over EPW vs. GWC, T-Money defeated four other men in an Ultimate X match at GWC Viva La GWC to return full control of the GWC to the returned Vice. Nevertheless, GWC Tribulation proceeded to end the war with Skyler Striker and Xavier Cross surviving against the EPW team.

At GWC Day of Reckoning, Kevin Hardaway won the Conquest match. Not many at the time expected what would become a dynasty. Hardaway quickly rose to the top, defeating Zak Warner at GWC Dire Straits to win the World Championship. From there, Hardaway's reign with the title encompassed what the GWC strived to be: unrelenting, dominant, and filled with passion. Fending off such challengers as Joe Ragnal and Reckless Jack, Hardaway defeated all in his path from late 2007 until early 2008. It would not be until the March 2008 PPV GWC Unholy Coronation that Hardaway's reign would end at the hands of David Alastair. This time in the GWC represented the company's pinnacle so far. The Hardaway Era would however continue when Hardaway regained the championship at GWC Vindication and ended shortly after. With his retirement and a bunch of changes looming, many are calling this the "golden era" of the company due to the high point it shared.

On July 16, 2008, Danny Vice convinced Spike Kane to betray his brother "Reckless Jack" Brad Kane and join him and Johnny Reb in a new stable. Immediately after, Vice dubbed this new regime to be "The Machine". Later the group expanded to include Jamal Carter, Derek Sitar, Sammie Rene, and Random McRally. However, Danny Vice went missing in action for some time. This was followed by the departures from the GWC of Jamal Carter, Derek Sitar, Sammie Rene, and Spike Kane. Johnny Reb and Random McRally remain loosely aligned.

A new commish rolled into town on the November 12th, 2008 edition of Wednesday Night Assault and his name is Christopher Scoville. He stripped all of the champions of their titles, temporarily retired the Television and Tag Team Championships, and put the remaining belts up for grabs at GWC Omerta in a revamped Dark Crusade, now called the Midnight Crusade. This was all done in an attempt to revitalize the organization and to reinvigorate the wrestlers. Additionally, he claims to be in talks to buy the entire GWC itself. New things are afoot in your favorite wrestling company. Stay tuned.

After GWC got 3 competitors left in the tournament, Resse put all of them in a Triple Threat match and the winner becomes GCW World Heavyweight Champion. 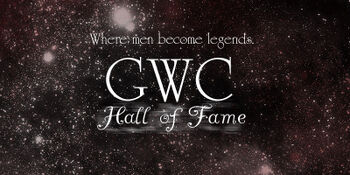