The eWrestling Encyclopedia
Register
Don't have an account?
Sign In
Advertisement
in: Elite Answers Wrestling, EAW, CPV's,
and 2 more

Cash In The Vault Match
WWEFan vs. Extreme Enigma vs. Adam vs. Nik-E-G vs. Speedy vs. Cole Smith vs. Bobby Cash vs. Carlos Rosso

The secondary feud of Mr.DEDEDE taking on Jaywalker for the World Heavyweight Championship began as both men's egos finally met following the Grand Rampage. Mr.DEDEDE showed no fear against the corrupt Vice President, accepting any challenge for his World Heavyweight Championship. However, both men were interrupted by both Regulator and Grand Rampage Winner: Captain Charisma, demanding World Title shots of their own. This led to Mr.DEDEDE and Jaywalker taking on the reuniting, Chain Gang Playas (Captain Charisma & Regulator). Captain Charisma and Regulator won the match, with Regulator continuing an attack on Mr.DEDEDE after the match until it is stopped by the Referee. However, Jaywalker decided to use his power for a World Title match immediately following the tag team match, quickly defeating Mr. DEDEDE and becoming a three-time World Heavyweight Champion. 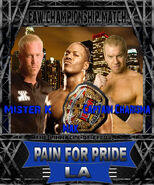 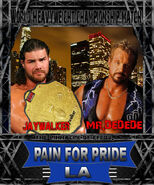 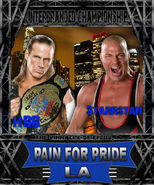 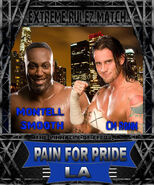 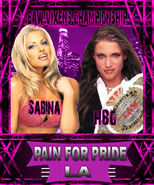 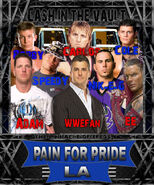