The eWrestling Encyclopedia
Register
Don't have an account?
Sign In
Advertisement
in: Elite Answers Wrestling, EAW, CPV's,
and 2 more

Pain for Pride (also referred to as Pain for Pride I) is the first event in EAW’s annual flagship FPV series featuring the culmination of matches and storylines from varying extremists from the Showdown and Dynasty brands. It took place on June 29th, 2008 in front of a sold out crowd in Madison Square Garden, in New York City, New York.

The card consisted of nine matches, co-headlined by Masters vs Tyler A for the EAW Championship as well as a triple threat between Carlito is Cool, MvM, and Jayjayyyyy for the EAW World Heavyweight Championship.

Pain for Pride I is often remembered as the most important event in EAW history, one that marked a turning point in the company’s success, set it apart from competition, and changed it’s trajectory. At the time of the event, it was EAW’s highest grossing and fan attended event up to that point.

Pain for Pride was originally intended to be on of several EAW brand-exclusive FPVs while under the AWF banner back in 2007. Due to AWF's sudden closing, the plans for this event never materialized but the hype for the event remained. When EAW returned as an independent entity it inherited the Pain for Pride event while capitalizing on the initial hype and anticipation for it by promoting it as the company's biggest event of the year and flagship show for years to come. All storylines and events through the first half of 2008 were booked with Pain for Pride implications and every extremists goal became to make it to the event and create moments there. The Grand Rampage was a further implication of the importance of this event as the winner of the Grand Rampage match would be granted the opportunity to choose the world championship match of their liking at Pain for Pride. The first ever Grand Rampage winner was Masters and he chose to continue his quest for the EAW Championship.

The rivalry between Mr. DEDEDE and HRDO began at Grand Rampage after DEDEDE teased retirement to fully focus on his Hollywood career, only to be met with a chokeslam by HRDO. Mr. DEDEDE returned the favor, costing HRDO the match by throwing him over the ropes ending HRDO's initial elimination spree. The feud continued in the following weeks, as HRDO interfered in Mr. DEDEDE's Showdown match with Heart Break Boy by chasing him out of the building, causing DEDEDE to lose via forfeit. HRDO interfered again after DEDEDE defeated Jayjayyyyy on Showdown, planting DEDEDE with a chokeslam and hitting the tombstone piledriver on the announce desk which left DEDEDE with a concussion. DEDEDE and HRDO in the subsequent weeks engaged in a series of brawls, including one on a prime time episode of Showdown in DEDEDE's hometown of Bridgeport, CT where Mr. DEDEDE dumped HRDO off of a bridge and dumped him into the Long Island Sound. The rivalry reached a climax at Pain for Pride event with CM Ronn participating as the special guest referee. Mr. DEDEDE defeated HRDO after capitalizing on Ronn's unexpected attack on HRDO. After emerging victorious, DEDEDE hit Ronn with a Grand Slam and celebrated on his own. This match would end up going down as one of the most important matches in EAW history and mark the start of a three-way connection/rivalry that would go onto span through multiple generations of EAW and future Pain for Prides. 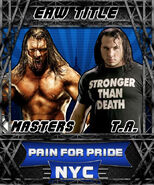 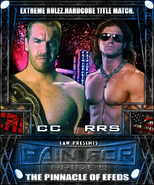