Charlie made his debut in May 2007 in Ronald Reyes' company, Velocity Wrestling Federation, during this run he is best known for finishing in the semi-finals of the World Championship, losing out to Rock ‘n’ Roll God and for winning the VWF International Championship. He would later join his Skyfall Wrestling Alliance, where he briefly held a 3 match winning streak. Charlie went on to compete in the now defunct Next Generation Wrestling, where he was part of the Suicide Freakshow stable, winning the tag team titles with The Ringmaster. He now exclusively active in CWE.

Charlie made an immediate impact in Ronald Reyes' VWF, defeating Zack Lowery, who he had something of a one-sided rivalry with, defeating him three out of three times. After losing out at a chance to win the VWF World Championship to Rock ‘n’ Roll God after a Red White & Blue Kick, Charlie faced Zack Lowery in a consolation prize match to become the first VWF International Champion. Charlie also held a loose allegiance between himself and VWF World Champion Raven Cyarm.

VWF collapsed before their second PPV, putting most of their roster out of a job. Charlie deliberated over whether to join Evolution Wrestling, the place where many of the now redundant VWF wrestlers were considering joining, but eventually elected to take a year-long break.

At the beginning of May 2008, Charlie made his return at Skyfall Wrestling Alliance with a decidedly more morose image, making his debut on Brandon Cole’s 'In The Squared Circle' radio broadcast in a bizarre audio promo using a TTS voice disguiser. He won three matches in a row, including a famous upset victory over SWA Skyfall Champion Lord Haddon. Charlie also managed to start a short feud with Xander, who he defeated in his first match. Charlie was defeated by Xander at the SWA Invasion PPV in a Sadistic Madness match, which appeared to deeply affect his mood, causing him to release a gloomy promo leading into his upcoming match with Shane Rivers. Before this match, Charlie hi-jacked the SWA Aggression broadcast and announced his dissatisfaction with the fans and his intention of fighting solely for himself, instantly earning the crowd's hatred. He debuted this new mean streak against Shane Rivers, losing by disqualification after levelling Rivers with a steel chair. Due to an increased workload, and having taken on more commitments, Charlie decided to bow out of the Skyfall Wrestling Alliance in early September.

During mid-July 2008, it had emerged that Charlie had signed with Brandon Rivera's Next Generation Wrestling, which also had former VWF personalities Zack Lowery and Mike Lee amidst their ranks. After winning his first two matches for NGW, Charlie was introduced by the mysterious Ringmaster as the newest member of Suicide Freakshow, along with the ethereal Frances Rayne. Their immediate targets were The Frenzy brothers, who currently hold the NGW Heavyweight, High Impact and Tag Team titles. The Suicide Freakshow, in the form of Charlie and the Ringmaster, quickly earnt number 1 contendership to the tag teams titles, which they successfully won at NGW's Satan's Play Yard PPV on the 21st September 2008. Along with Frances Rayne winning the NGW Diamond's title, this meant that all the member of SFS had won championships. After growing instability, NGW closed it doors soon after, with Brandon Rivera opening Canadian Wrestling Entertainment in early 2009.

After several months of speculation, it was revealed that Charlie had signed with Canadian Wrestling Entertainment, putting in a fine performance in an elimination tag before being the last man eliminated. Charlie then lost at a CWE Monday Night Shinedown to former NGW star Mark Frenzy in Frenzy's final match for the company, sharing a handshake of respect following the match. Charlie then picked up his first CWE title, in his first PPV for CWE, defeating Peter Kaymakcian in a Best of Three match (First Blood, Hardcore, Last Man Standing), showing a sadistic streak by hitting the Dirty 187 as Peter was already out for the count in the Last Man Standing portion of the match. Charlie went on to lose his CWE Extreme title against Mario DeLuca in a unification match, with DeLuca's CWE Television title also on the line, forming the CWE Extreme Television Championship. Following a brief hiatus from the ring, Charlie returned, this time indignant and opposed to the running of CWE through The Family. For his troubles, he was given a high-profile inter-brand rematch against Mario DeLuca at Cyber Genesis, which he won after crushing DeLuca's throat, causing him a prolonged injury. After a few weeks of active competition, Charlie suddenly went missing for two weeks, causing much speculation amongst CWE faithful. He eventually re-emerged, apparently under psychiatric treatment at Foothills Medical Center in Calgary. His sadistic psychiatrist, Dr. Bill Goodman has lately been accompanying Charlie to ring, cutting his interviews and encouraging him to fight fairly (or else face more 'treatment', namely government mandated torture). Under the tutelage of Goodman, Charlie managed to capture the CWE Intercontinental Championship against fellow CWE veteran The Nightmare, albleit returning to his 'hardcore' ways, earning a dressing down (and presumably a beating) from an irate Dr. Goodman. His latest Vendetta match sees his team up with CWE Unified Champion Alex Von Rush to take on the returning Re-Evolution.

In the past, Charlie has had his problems with MANV (Mothers Against Needless Violence), with the group constantly berating Charlie for being a bad influence on children. This has happened to the extent that Charlie has adopted the nickname “The World’s Most Dangerous Bad Influence” and his status as a bad role model appears as a consistent topic in many Charlie the Bloody promos and interviews.

There was also an alleged incident during a VWF show in which Charlie is said to have purposely injured a heckler after a show, although Charlie has since denied this.

Due to his renowned secrecy, little is known of Charlie’s actual personal life, other than his real name being Charlie Maddox and his billed bodily statistics being roughly accurate.

Charlie the Bloody's current CWE entrance music is 'Going Blind' by the Melvins. He has previously used 'Grease Box' by TAD and 'Gets Me Through' by Ozzy Osbourne. 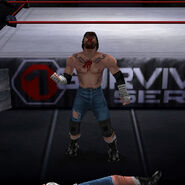 Standing over a fallen opponent 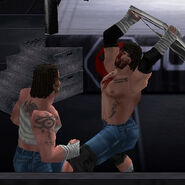 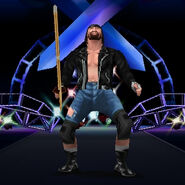 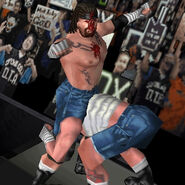 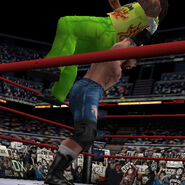 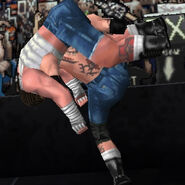 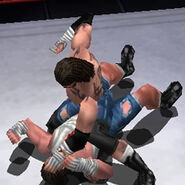 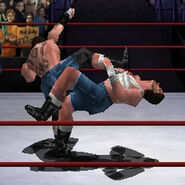 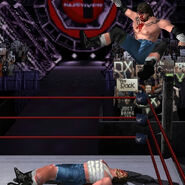 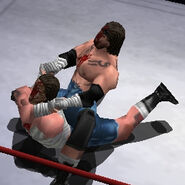 Cincinnati Straightjacket!
Add a photo to this gallery

Retrieved from "https://ewrestling.fandom.com/wiki/Charlie_the_Bloody?oldid=286718"
Community content is available under CC-BY-SA unless otherwise noted.