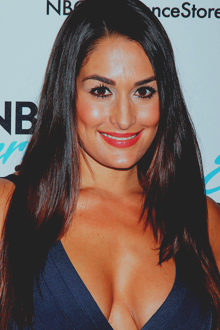 Angelita Vargas is an American hairstylist and fashion designer. Along with her twin sister – Adrianna; Angelita worked for World Elite Wrestling as hairstylists from 2011 to 2012. They would later both leave the company, however both would continue their careers as hairstylists, Angelita however would also venture into fashion design.

Vargas has been dating WEW wrestler Ryan Henderson since January 2013. In August 2013, Vargas and Henderson revealed their engagement and are set to be married sometime in early 2014. The couple currently reside together in Orlando, Florida.

Retrieved from "https://ewrestling.fandom.com/wiki/Angelita_Vargas?oldid=284859"
Community content is available under CC-BY-SA unless otherwise noted.